We’ve been struggling a lot lately with how to answer the question “What does Starfire do?”  It’s not as easy to explain as it once was, given our journey over the past few years.

So it’s best told in stories, and here’s one for ya:

If you read this post, you’ll meet Mike Holmes.  In one of my most treasured books, David Schwartz would say that on that day, Mike “crossed the river” from the land of “clienthood”  into the land of “citizenship” in my view of him.  What I came to understand that day was that Mike was not my “client,” “consumer,” “individual,” or “little buddy,” or any other word that is typically used to describe people with disabilities.

He was my best friend, who made a tough day a little better.  It was a big day for me, in so many ways.

Another big day was on the day of Mike’s PATH.  It was sometime in the spring of 2010.  I was there, along with Mike’s mom, dad and sister.  Candice and a few other Starfire staff, and a few of Mike’s good friends from Starfire were invited as well.  (As an aside, all of those friends had labels of disabilities).

As soon as we sat down, I realized how right (at least in spirit) Janet Klees had been about the issues with friendships (you can read about that at the end of this post.)  Here we were, sitting down to talk about Mike’s life…his greatest hopes and dreams for the future!…and the only people in the room were his family, paid staff, and other people with disabilities.

It’s not that those people are not valuable or important to Mike.  Quite the contrary!  But there is an especially valuable opportunity if we can find connections with unpaid, unrelated citizens who can be a part of Mike’s life.

I couldn’t help but think of all the people Mike and I had spent time with over the past few years:  Smitty, Adam, Jill, Sally….All of them seemed like missed opportunities.

At that moment, I understood that my friendship with Mike, while very wonderful,  mutual, and valuable to us both, had become an end instead of a beginning.  I started to comprehend that while Mike and I were out having fun (always guaranteed when we hit the town), we could have also been intentionally building more friendships with other people.  We could have used our relationship as a conduit to others.  Another big lesson, huh?

Mike’s PATH conversation was still terrific, as we knew it would be.  And his goals were pretty succinct:  Mike wanted to get involved in business, coaching, and volunteering.  There were many things mentioned, but Mike was pretty clear about those three things.

So we went to work:

Each year, Mike and I would be asked to speak on behalf of United Way.  We’d both dress up nicely and tell people how much we appreciated United Way and what it meant to us.  Mike was always the highlight, and I was usually along merely for chauffeur duties.  At one of the biggest speeches we gave, Mike brought a room full of the top brass of PNC Bank to a standing ovation in the Cincinnati Club.

Afterward, we asked Sally, who worked at United Way and had invited us to speak, if they ever had a need for an intern down at United Way’s offices.  She said sure, and within a month, Mike had secured a weekly internship at United Way, working on training materials and a Powerpoint presentation for their outreach programs.

At the same time, Mike, Candice and Alyson (another staff at Starfire), began hatching a plan for helping Mike get his feet wet in coaching.  Alyson coached the “Cincy Swish,” a local AAU girls’ basketball team.  She offered an assistant coaching position to Mike, which he accepted.  He runs drills, plans practices, and does all the other things a coach does.

We also worked on finding a few other people to get to know Mike.  We discovered Dave, who lives up the road from Mike’s house.  Dave loves wings and sports, just like Mike (and me!)  Last week, the three of us got together for Monday Night Football at BW3.  In the past few months, we went fishing together and we all took our kids (Mike took his nephew) to play Lazer Tag.  It’s a great start to another relationship that could mean a lot to Mike.

And last night, Mike was recognized as one of six “Difference Makers” in our city by the Cincinnati Museum Center.  He was nominated by the girls he coaches through Cincy Swish, and they all came to the awards dinner to celebrate with him. 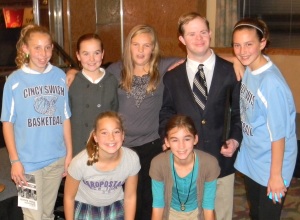 I love the fact that there were about 40 nominees, about 10 of whom were nominated for some version of “helping people with disabilities.”  And then there was Mike, who spends a lot of his free time helping others.  It’s not that those other nominees were not worthy, in fact, their stories were terrific!   It’s just that Mike’s was one that isn’t told very often, and that needs to change if we’re going to ever win the battle with public perception about what disability means to citizenship.

So, in thinking back to our original question, here’s what we do at Starfire:

Mike’s story, of course, isn’t over.  Candice is helping him connect with a new job at a local architecture firm, so he can ditch the part-time job he’s had since high school washing dishes at a steakhouse.  He’s still thinking about a girlfriend, and getting to know Dave and others.  But this is a great start to a good life, isn’t it?

I like to think about the fact that if Mike’s PATH were happening today, Dave and Sally and some of the other Swish coaches would be in that room, along with Mike’s friends and family.

And the lesson we learned through Mike taught us what others need.  Now, we intentionally find people to invite to PATH gatherings who can offer something to the conversation, even if they don’t know the person that well.  And we make plans to meet those kinds of people.

One young man discovered a love for martial arts through Starfire.  We started going regularly to a local dojo and eventually invited the local dojo’s Master to that young man’s PATH.  In the conversation, Master K invited Kyle to start taking his classes on Monday nights.  And he quickly dismissed the notion that Kyle would need any “special” help or accommodations.

And I imagine Dan will be at Andy’s PATH.  And we’re better at connecting everyone, not just those for whom we would hope might be important in the life of a person with a disability.  So these end up being life lessons in how to be better citizens and friends.

And as any good friend would do, I requested this piece of cake at the celebration last night, so Mike wouldn’t get a big head about his award: 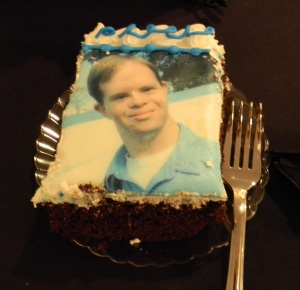